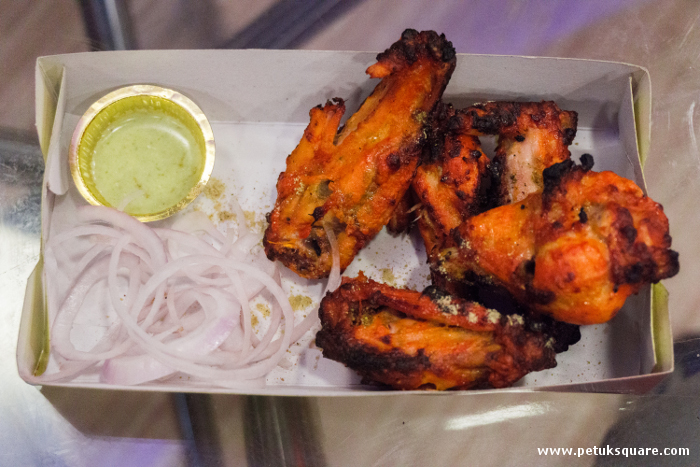 In Calcutta, if you are craving for some kebabs, you will have to visit either some Mughlai restaurant or a Punjabi one. There are few exceptions like Barbeque Nation, Flame ‘n’ Grills, Shaina Chicken or the small kebab stalls in Colootola. An addition to these is the Kolkata Kebab. We went to their new Shyambazar outlet recently. 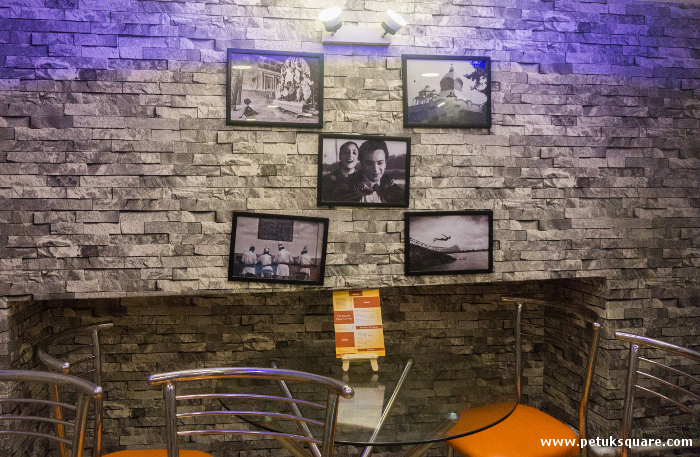 If you are walking from the five point crossing towards Rajballav Para via Bhupendra Bose Avenue/Central Avenue, the small outlet will be on your right few meters ahead of the Metro Station exit. It’s a very small outlet, but they have utilized the space well. The ground floor have a counter where you can order the takeaway and the first floor, reached via the tricky round stairs, is where you can sit down and enjoy the food. There are 4 tables and thankfully an AC. A bit cramped but comfortable. The walls are adorned with black and white pictures related to Kolkata and it adds to the feel we thought.

Although a kebab specific joint, the menu didn’t have much variety. Among the nine different types of kebabs served, six where chicken. Only one each of fish, paneer and egg. We found no mutton options. So it looked like one of those places which specializes on chicken. The best thing in the menu was the pricing. Extremely affordable. Apart from the kebabs there were burgers and wraps, combo meals with rice and naan and desserts. 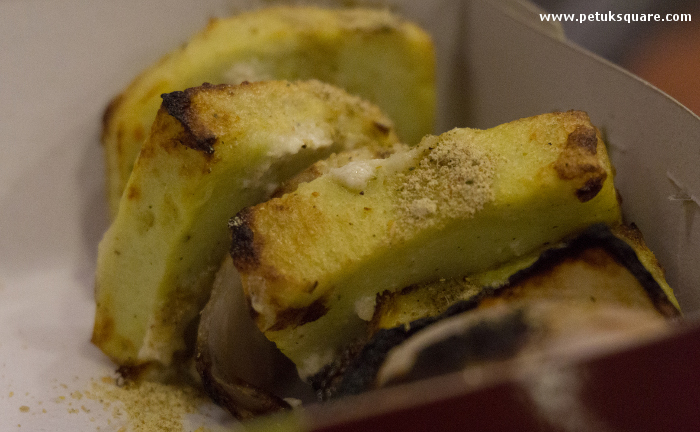 The first thing we ordered was Anda Nababi Kebab. The price of 4 pieces were 39 bucks only. Whisked eggs steamed and cut into cubes looking like paneer. From the colour it looked like they seasoned it with the green chutney that is served along with the kebabs. The cubes were skewered along with tomatoes and onions and grilled. The grilled onions and tomatoes tasted good along with the masala sprinkled on top. Though the egg cubes had a greenish colour, could not find the taste of the green chutney or anything else in it other than the taste of the egg. As an egg lover it was a nice innovation though. Fun, but nothing exceptional. 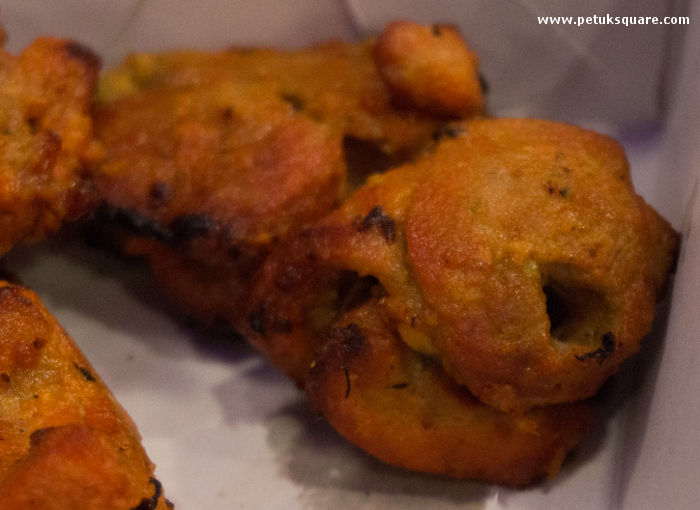 Next we ordered the Murg Peri Peri Kebab. Four pieces were priced at 86 bucks. Chicken pieces were soft and juicy. Unlike the name, it was not too spicy, but more on the line of tikka. Tasted good. 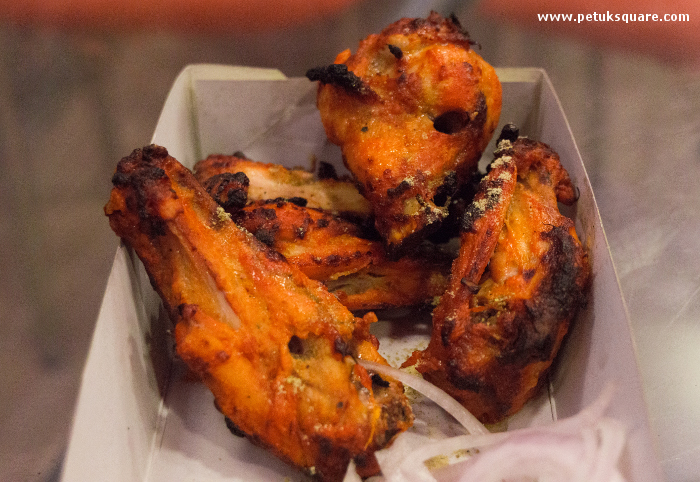 Wanted to order a plate of Ajwani Mahi Tikka, but it was out of stock, so went with another chicken kebab, the Murg Chatpata. Five pieces of the kebab was priced at 59 bucks. These were chicken wings prepared like Tandoori Chicken. Extremely pocket friendly and really nice taste. The best we had there till now. Juicy and flavourful, the only problem was the amount of salt being a bit on the higher side. But then, this is how most places make tandoori chickens. 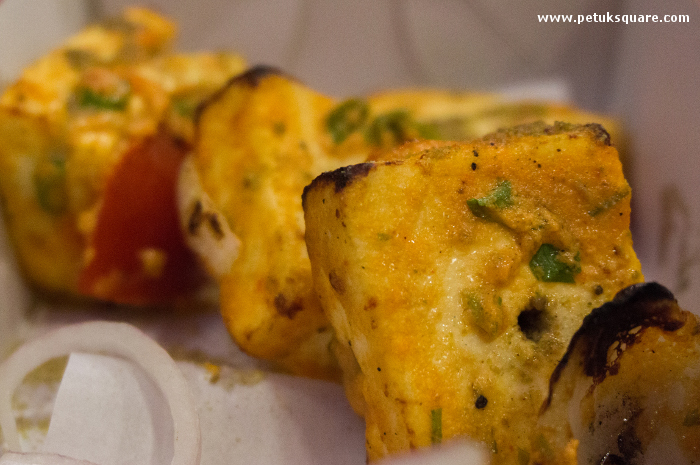 The only veg order of the day was the Chilli Cheese Paneer Tikka. Four pieces were served for 79 bucks. For people who love paneer, don’t miss this here. I loved it for two reasons. Firstly I hate fat chunks of paneer, unfortunately served by the majority of the restaurants. The bigger the restaurants, the bigger the chunks of paneer. The basic thing they don’t understand is the texture of paneer does not allow spices or gravies to be soaked inside. Hence bigger the chunks, blander the paneer tastes, however good the gravies or spices are. Kolkata Kebab being a pocket friendly place, the paneer cubes are also smaller, making it tastier. Secondly, most paneer dishes are made as a sweet or sour dish. Chillies hardly are used as a main ingredient. Here the chillis have added a whole new dimension to the dish. The cheese also complimented the dish well. Thankfully again, it was not covered with cheese like some places do with their chicken cheese kebabs, and only hints were cheese could be tasted while savouring the paneer. According to us, it was a good try. 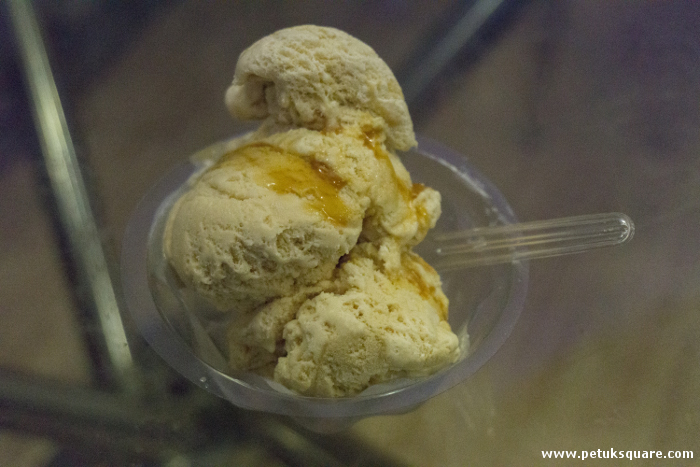 They told the Nalen Gur Ice Cream they serve is also made in house. At 59 bucks the serving was generous and it tasted good too. Another good thing I noticed was the mineral water bottles were sold at MRP. Excellent gesture considering almost every place sell them at exorbitantly jacked up prices, as if they need to make profits only with those. Service was fast.

They are giving out membership cards using which you can avail a 10% discount on your next visits. We liked the place. Not exceptional kebabs, but decent ones, with few really good ones. Also with their pricing it’s possible to try out various items. The kebab pieces are a bit small, but we think the pricing was cheaper. We are definitely going back to try more.

Good review as always. Wanted to find out more about this new place before visit. I’ve heard good things from another friend and there too, the chatpata kebab was rated high. The combo meal with chicken reshmi butter masala fetched high praise too.

Thinking about trying out their combo meals soon 🙂