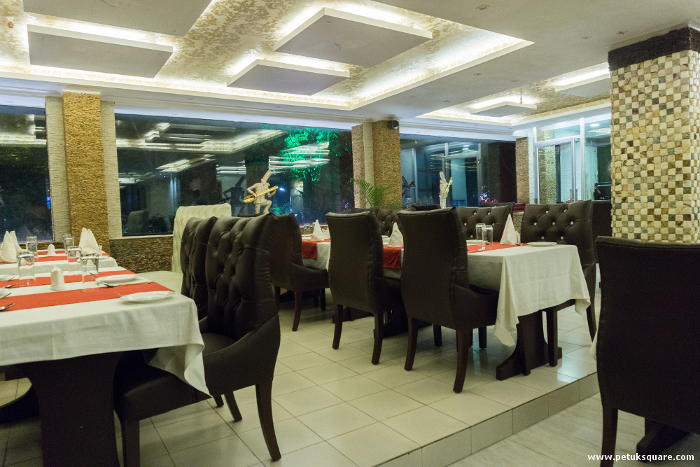 There are few restaurants in Calcutta, which serve both Indian and Oriental cuisine, and are good at both. Either they are a Chinese joint also serving Indian, or vice versa. The Palms is one of those few where we tried and liked both. We love mixing dishes from several cuisines at times, specially when visiting new restaurants, to find out their strengths. That is exactly what happened at The Palms. 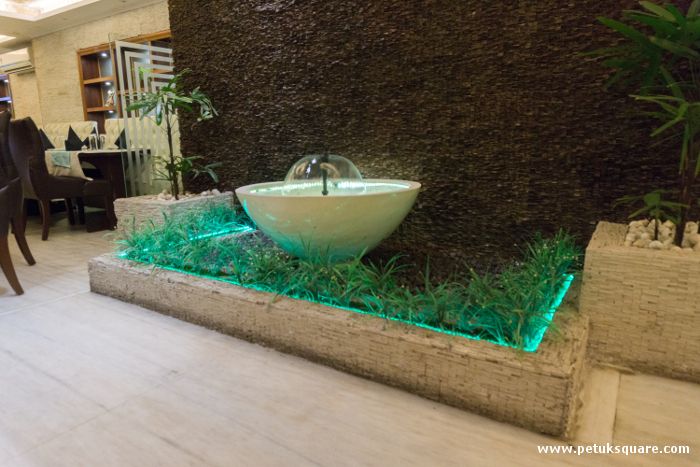 The fountain near the entrance

We have been eyeing this place in Southern Avenue for the past few months, and finally went there last week. If you enter Southern Avenue from S.P. Mukherjee Road / Rashbehari Crossing side, this restaurant will be on your left after few buildings. Once inside we found the place quite spacious and brightly lit. The ambiance was great with a small fountain just opposite the entrance. The seating was mostly comfortable with the exception of the sofas, which, we thought were bit too soft to be comfortable while dining. Also people with average height will face difficulty due to the sofa and table height issue. 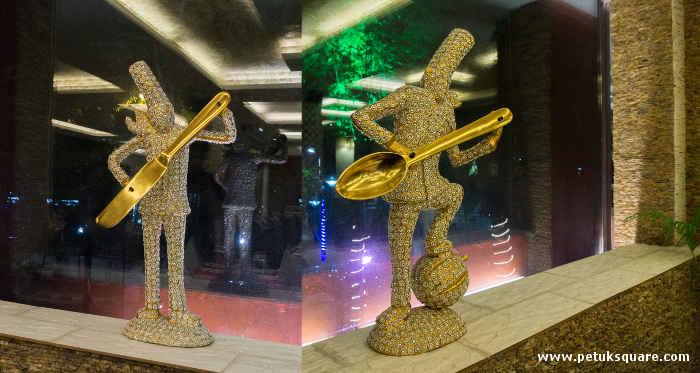 The service on the other hand was perfect. They were fast, friendly and really helped with the food selection. As it was a Indian and Oriental mixed dinner we tried to order each type in groups. 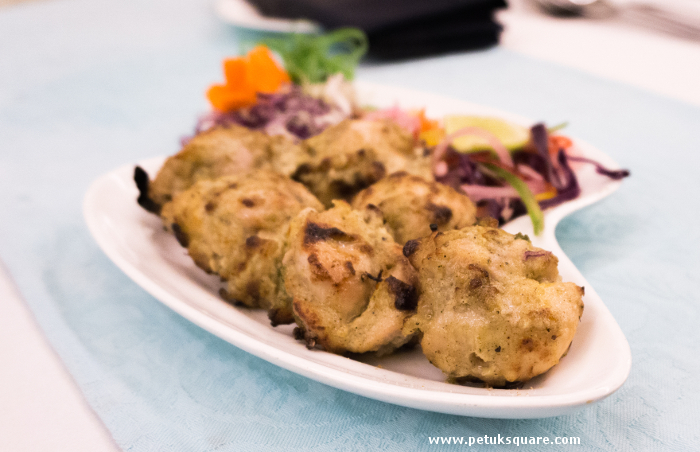 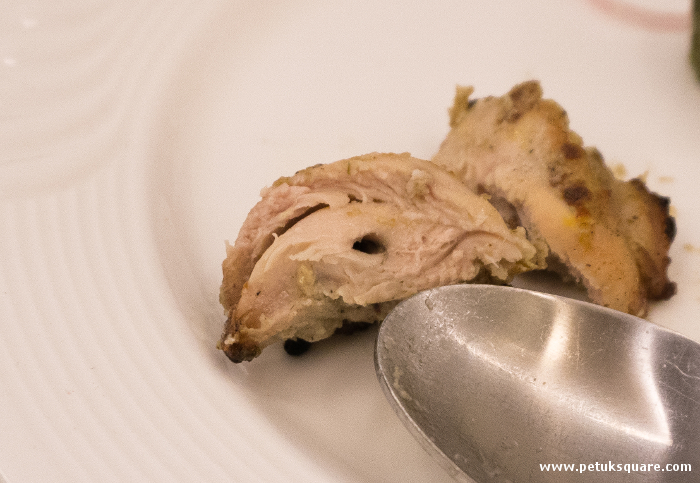 We started our dinner with the kebabs, one chicken and the other fish. Chicken Joojeh kebab was soft, creamy and juicy. Light flavours and a perfect starter. If you are sick and tired of eating the same reshmi and tikka kebabs, try this. 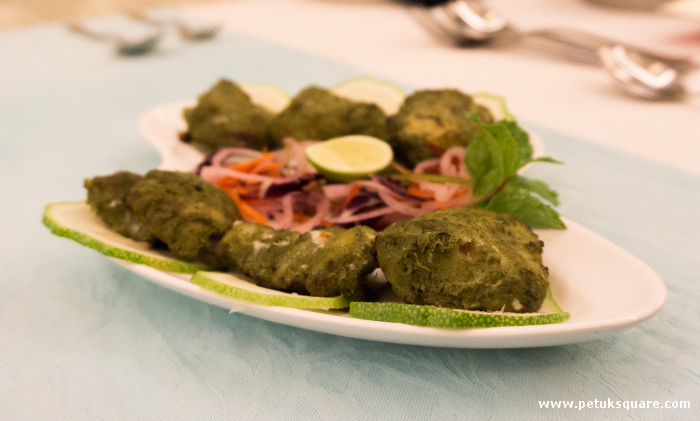 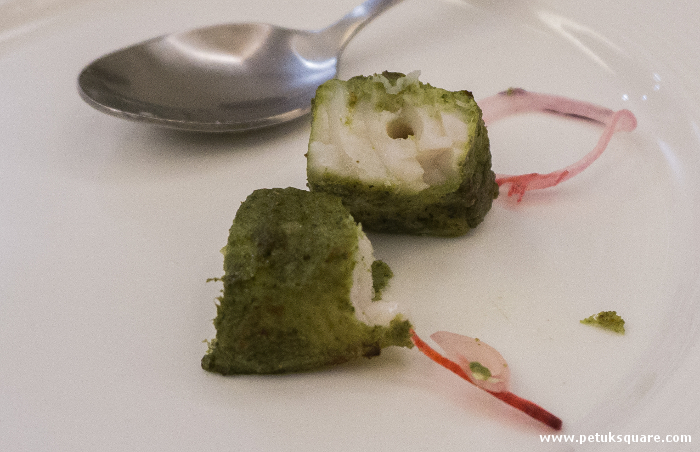 The Mahi Pahari on the other side was marinated in a green sauce of pudina, palak and gondhoraj lemon. Rich but balanced flavours and thick, juicy fish made this our favourite among the two. 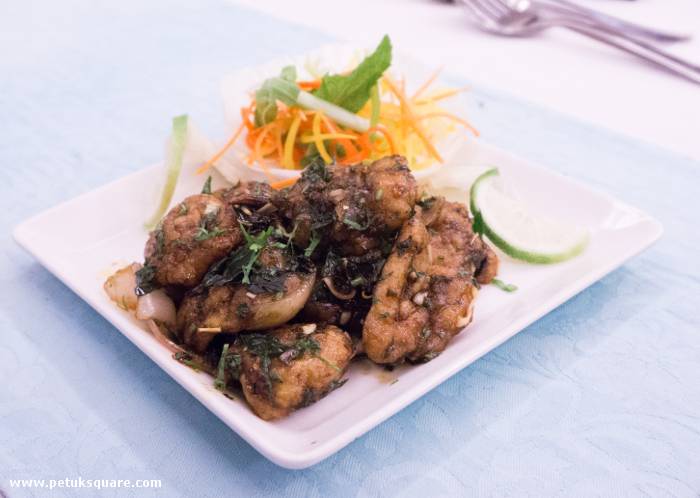 Done with the Indian starters we ordered Takrai Gai. It is a Thai dish where Takrai means lemongrass and Gai means Chicken. So it was dry starter of lemongrass chicken. Thai dishes if not prepared correctly can easily become inedible. But this one tasted delicious with juicy chicken pieces in a tasty spicy sauce. 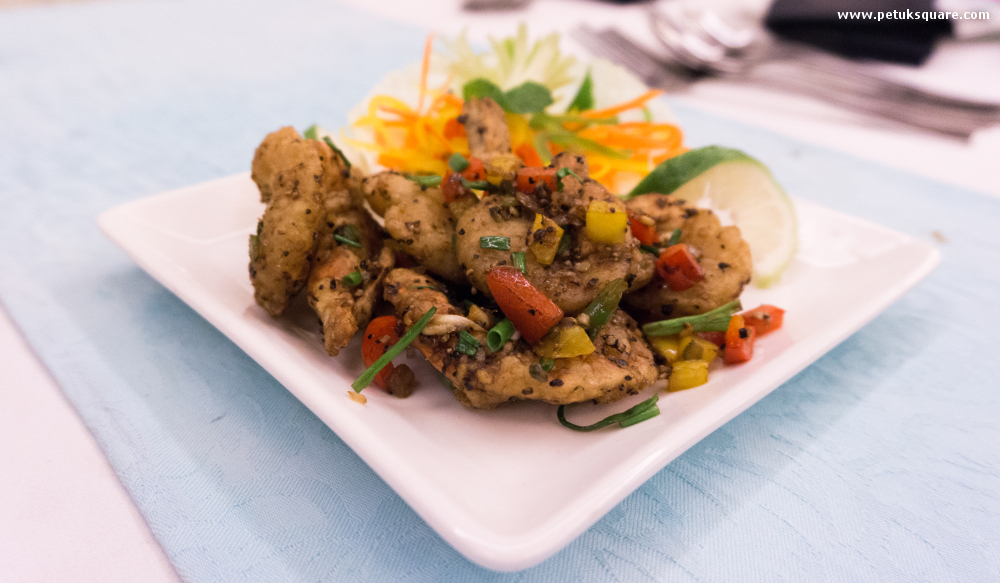 Being a lover of prawns we were delighted with the suggestion of Crispy Prawn Garlic Pepper as our next starter. Koong Kartium Prik Thai or Prawn (Koong) Garlic (Kartium) Pepper (Prikthai) had big juicy prawns which were cooked well and didn’t turn rubbery and tasteless like we see at many places. It tasted awesome, though I would have liked it to be a bit more garlicky. A great starter still. 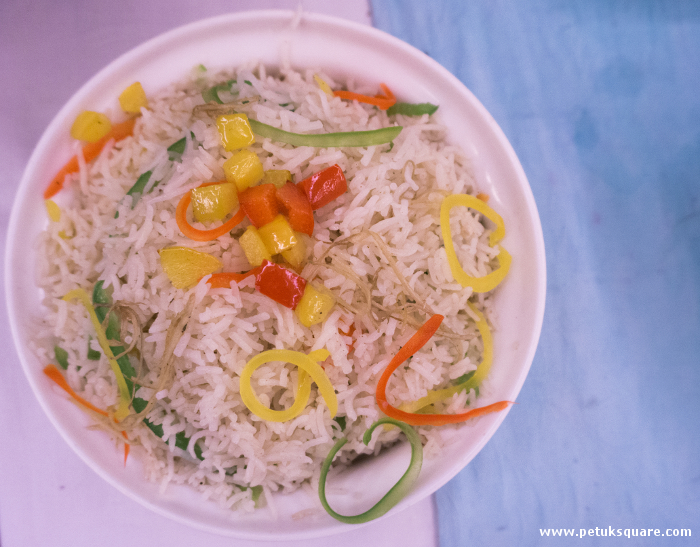 For mains our first round of orders were Chicken in Devil Sauce and Sliced Fish in Bell Pepper Oyster Sauce. Accompanying them was the Ginger Capsicum Flavoured Fried Rice. 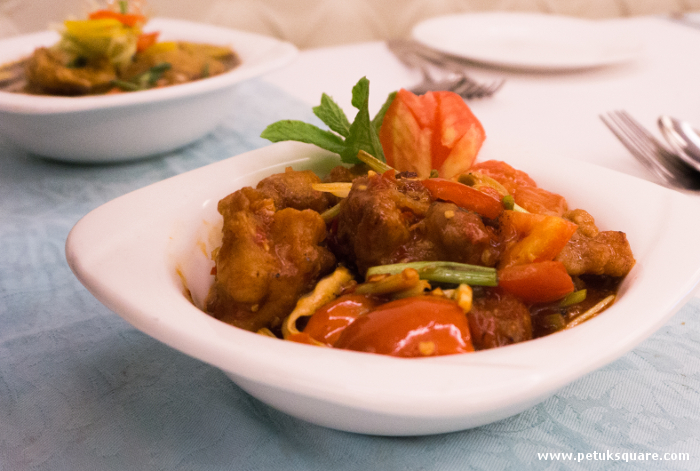 The Chicken in Devil Sauce was bit spicy and hot. If you love rich flavours your would like this dish. The chicken was soft and there were pieces of mushrooms along with the meat. 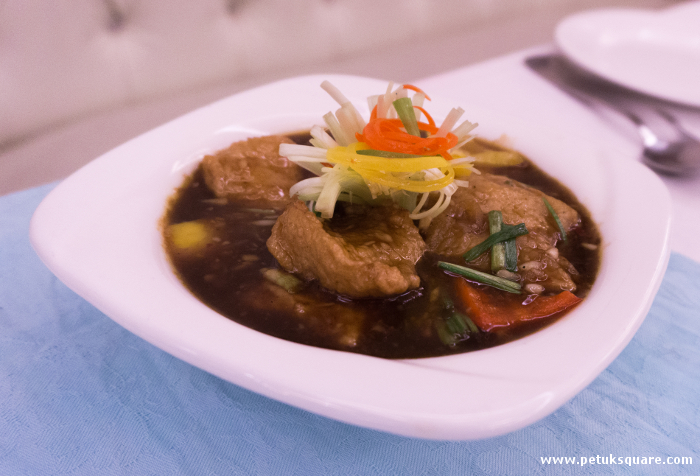 The fish on the other hand was mild yet flavourful. The fish pieces were big and juicy. The rice complimented both the dishes really well. With a non-overpowering taste, it allowed the respective sauces to rule when mixed with them, just reminding his presence when you bite those occasional slices of ginger. 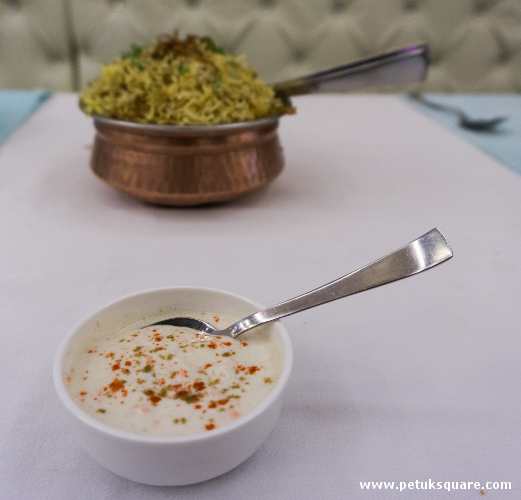 Now it was turn for the Indian mains and spoilt with choices we ordered four dishes which we thought would be really different in taste. With them we ordered the Murgh Zafran Biryani and naans. 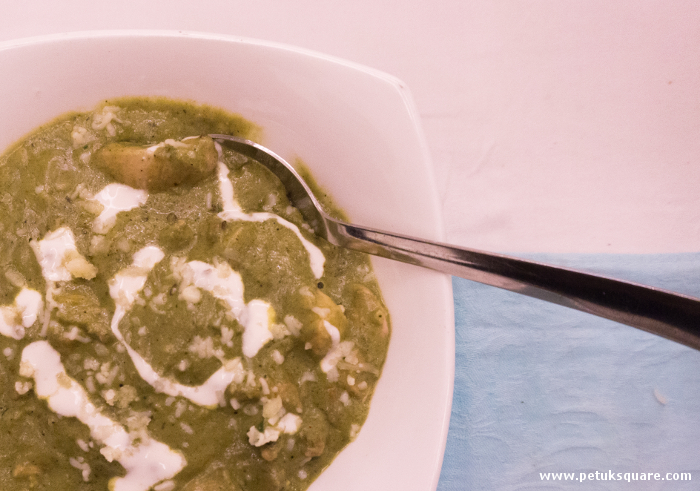 To begin with Murgh Lahori had a cashew-nut and palak based gravy topped with fresh cream. I don’t know how this dish is cooked originally in Lahore, but what we were served was good. A bit on the sweeter side (like Afghani sides most city restaurants serve), it went well with the keema naan. 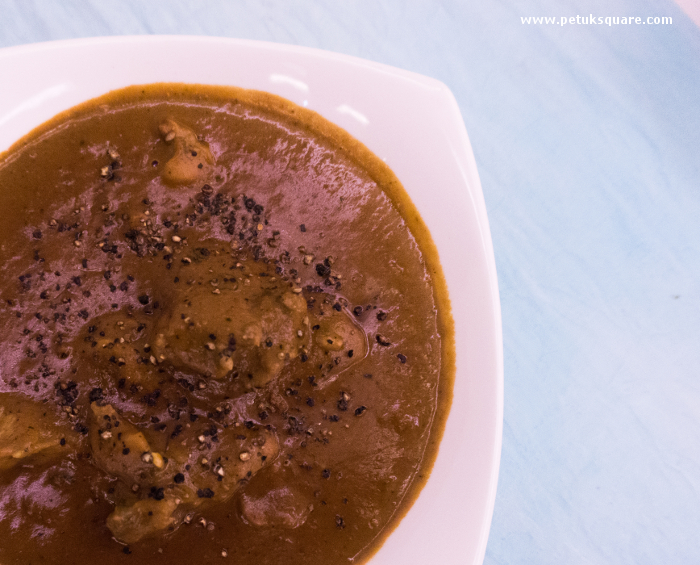 Murgh Kalimirch on the other hand had a dark peppery gravy and I liked it more among the chicken dishes. I wish I had it with Tandoori/Khamiri rotis, but as we already ordered a lot, had it with the keema naan instead. 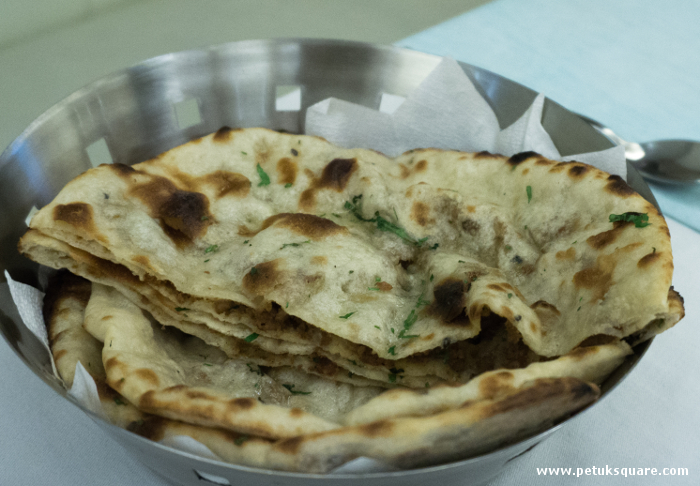 The keema naan was soft with just the right amount of keema inside it so that it can be used to wipe off the gravies of the sides. 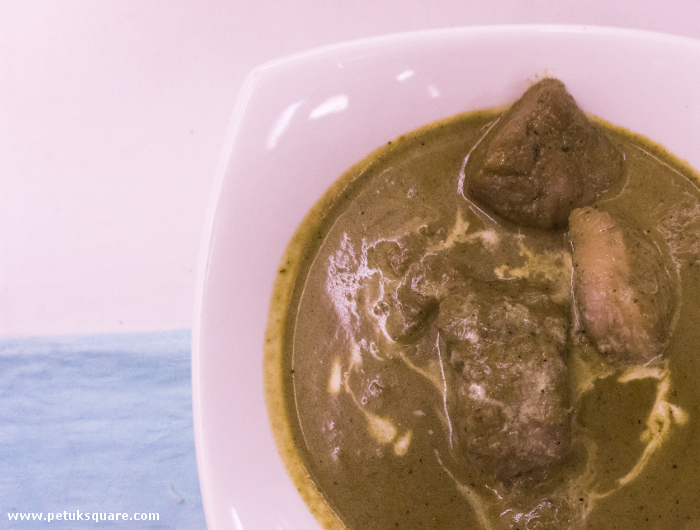 Fish Hyderabadi, as the name suggests, is a South Indian Nizami dish. The fish pieces here also were excellent. The quality of fish in all the dishes were just too good. If you love fish, you will love this place. The dark green coconut milk based gravy, however, I didn’t like personally. 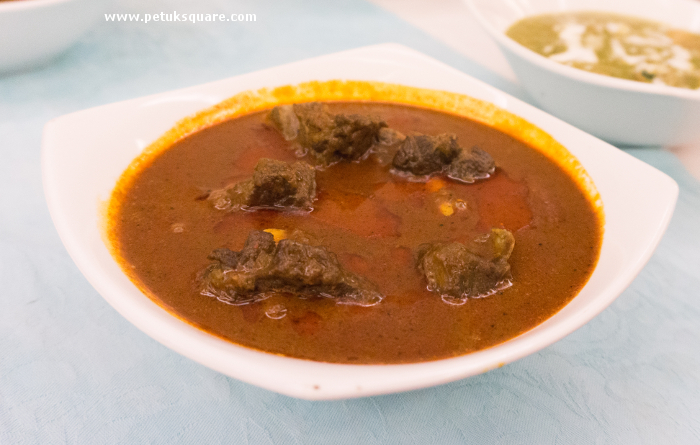 Gosht Rogan Josh, a Kashmiri dish, was our fourth Indian side for the evening. Though not cooked traditionally without onion or garlic, the gravy was tasty and went well with the Peshawari Naan. But the highlight of this dish was the mutton. Very few restaurants serve meat this soft and juicy. It was literally melt in your mouth soft. If you love mutton, this is one dish you should not miss trying here. 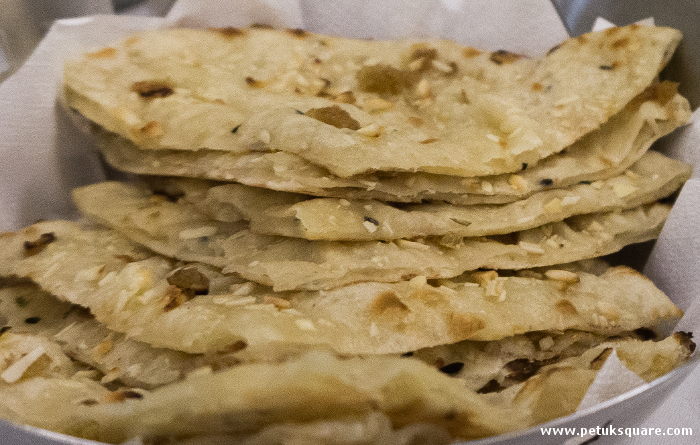 The Peshawari Naan is a specialty here. I haven’t noticed this dish anywhere else in this city. It is a naan filled with cream and coconut and topped with almonds. If you have a sweet tooth you will love this dish. It went well with the Rogan Josh. However if you do not like too much sweetness in the mains, like me, try having just a quarter for tasting. It surely was a unique experience. 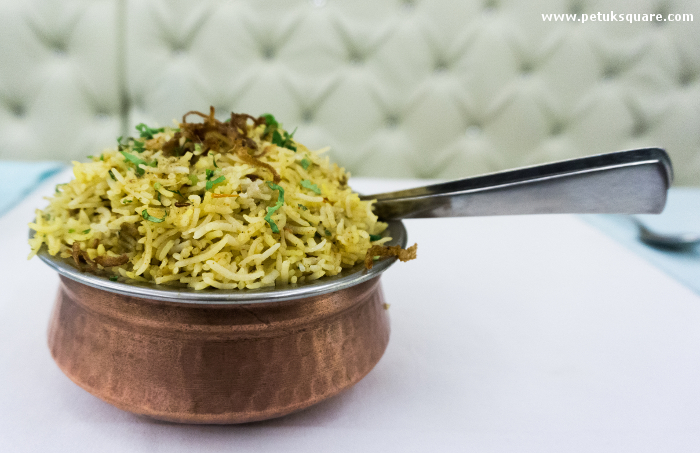 We ended the mains with the Murgh Zafran Biryani. It was served along with complimentary raita. The biryani was light and flavourful. But the chicken pieces were a tad dry. The raita was great. Thick and tasty. 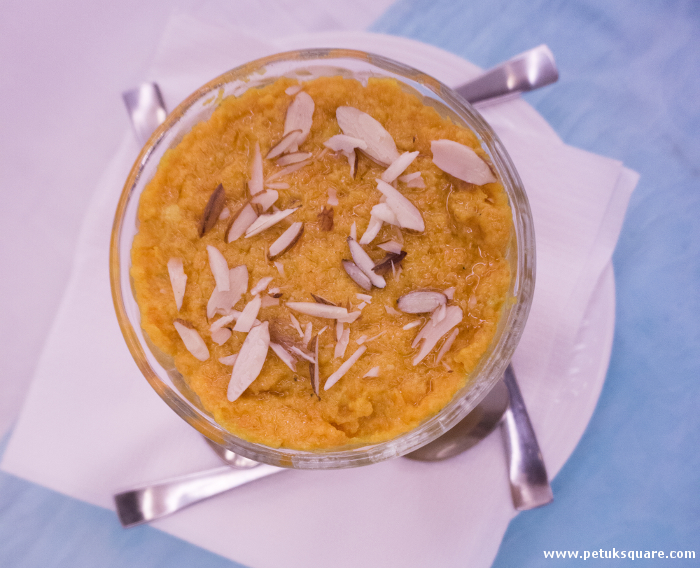 We were almost full by now, but who ends a good dinner without some desserts? So in came the Gajar Ka Halwa. It was slightly warm and the sweetness was not overpowering, which I really liked. Good dense taste of carrots with the right amount of sweetness. If you want a good dessert and try to play safe, order this. 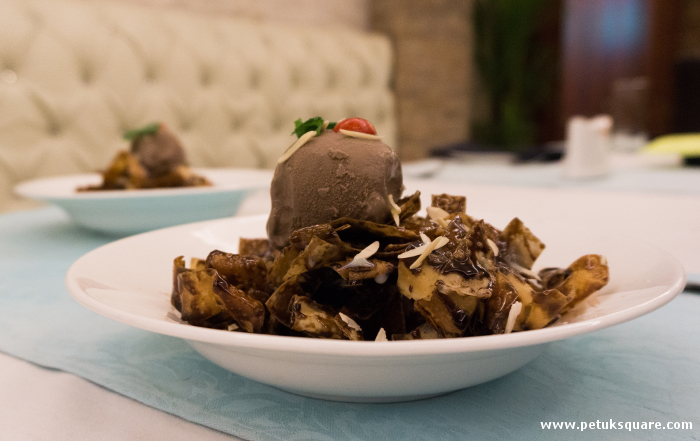 The next one was an experimental dish. It was Darsan, but the honey was replaced with chocolate. It was crispy and again with the right amount of sweetness of the chocolate. The chocolate ice cream scoop, however, could have been a lot creamier and richer. Changing the brand of ice cream can easily solve this issue. This was my favourite among the two desserts.

Overall, the experience was pretty good. Apart from a few ingredients in couple of dishes, most of them were great. The Indian dishes were tasty, but, for me, the Oriental dishes stole the show. A good place if you want Indian or Oriental food.