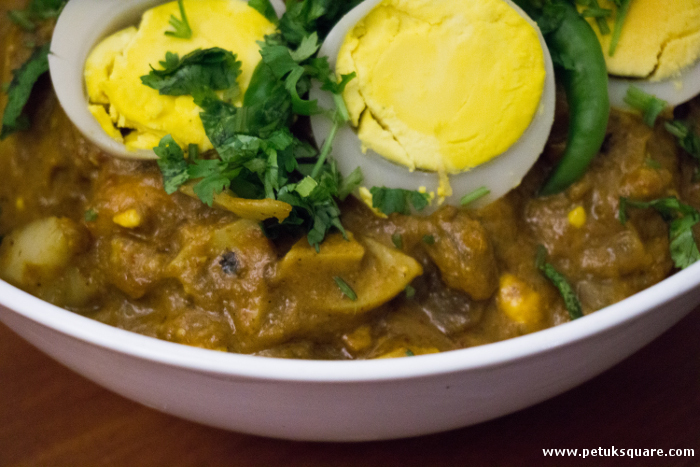 With the rise in number of restaurants serving Bengali cuisine, the varieties of food on offer have increased too. With rising competition, every place is trying to offer something unique to get the attention of the foodies. So, when I got an invitation for dinner at Sudipar Rannaghor, the first thing that came to my mind was what specialty would be on offer for us. And though, unfortunately, I have not been able to catch even a single episode of Sudipar Rannaghor, a Bengali TV cooking show, there were expectations, as it is, I heard, a very popular one. 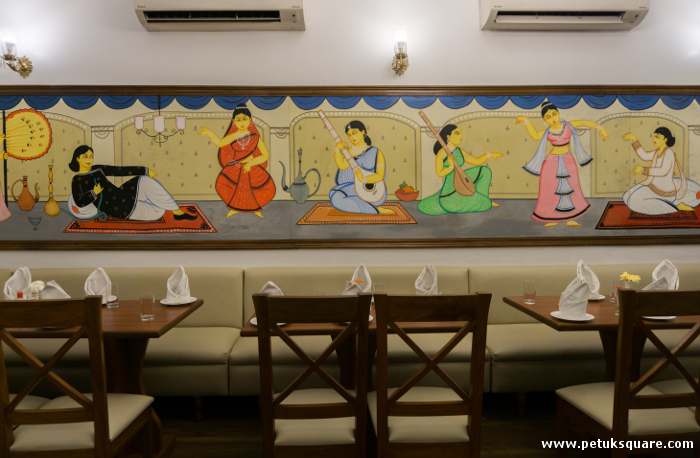 Located on Purna Das Road near Triangular Park, this is where Baati Chokha used to be. Excellent location, easy to find and travel to. The place is brightly lit with comfortable seating arrangements. The walls are decorated with beautiful paintings depicting the lifestyle of 19th century Bengali Babus. Goes well with the theme. But I felt it somehow fell short of creating the ambiance it advertises of, i.e. a place to experience Babuyani. They could have used more props. The place actually feels under decorated. 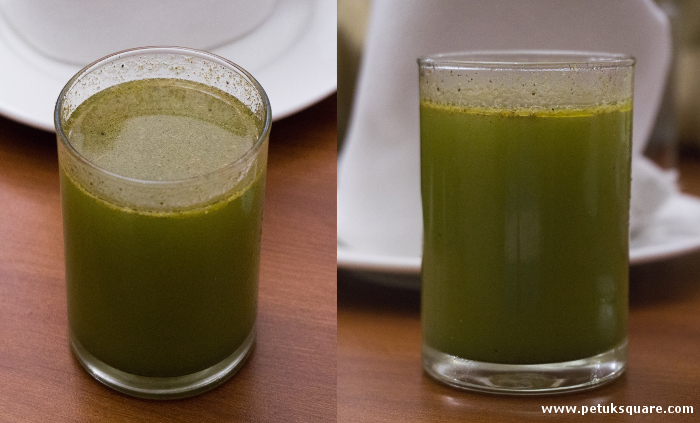 Coming to food, they do have some exclusive items. Few other items were good too. Let us take you through the dishes which you must have, if you are planning to visit Sudipar Rannaghar. To begin with, among the drinks, Gondhoraj Ghol sounded the best. But we were recommended Sphotik Jol (or was it Fotik Jol?). While the earlier is no doubt a refreshing drink, it is also very common at Bengali restaurants. Fotik Jol, apart from being an uncommon drink, also was a winner as far as taste is concerned. It is basically, as Sudipa told, Bengal’s own version of Jaljeera. But the similarity ends right there. Yes, both are used as appetizers, but Fotik Jol tastes much much better. We were told it was used to cool down the body and increase appetite on returning home after long hours under the sun. The green coloured tangy drink is made using several spices and a bit of oil. We found it to be really addictive. Don’t give it a miss if you are here. 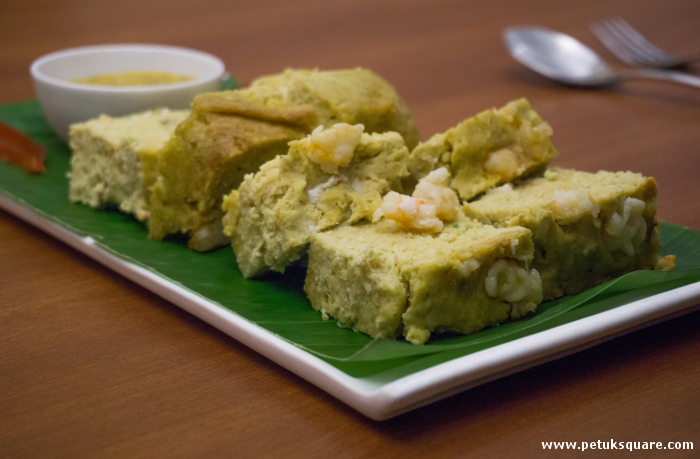 Among starters the dish we liked the most was the Chingri (prawn) Cake served along with Kasundi (Bengali style mustard sauce). This is one of their specialties. The cake had a mild peppery flavour and there were small pieces of prawns in it. We loved this dish. Not like anything we are used to have at Bengali restaurants. Sudipa later told us that she have conceived the restaurant not as a pure Bengali one, but one serving Calcutta cuisine. So it will have dishes influenced by the English, Portuguese, Armenians etc., who have been a part of this city at some time or the other during the past few centuries. Presently it is predominantly Bengali, but the owner wants to expand the foreign influenced dishes too. 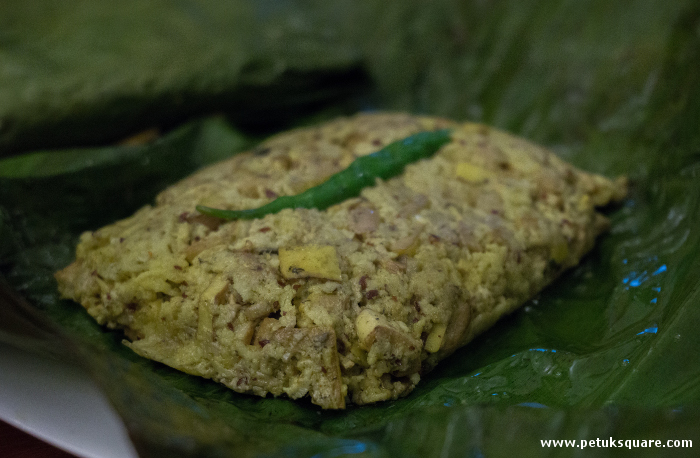 If you love Mocha (banana flower) then Mochar Paturi is a dish you would love here. Cooked inside a banana leaf along with mustard, this goes well with steamed rice or can even be had alone. A good example of delicate Bengali vegetarian dish. 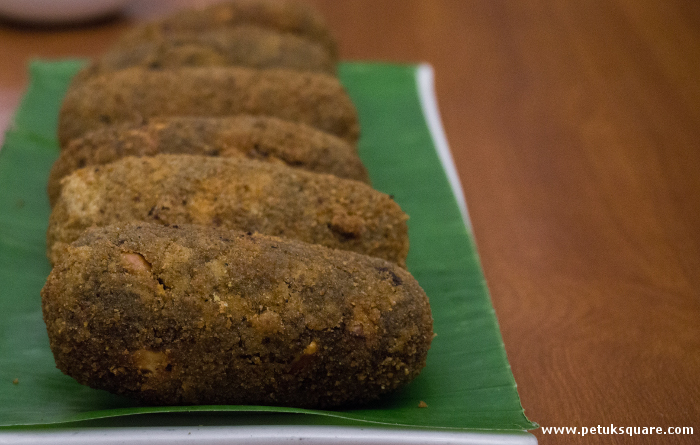 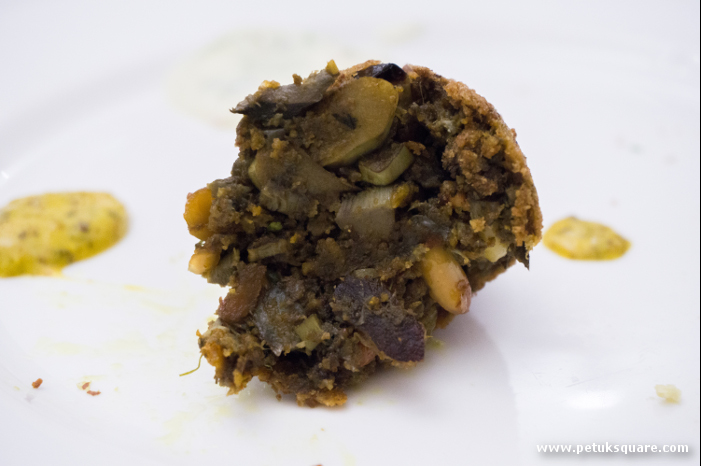 The Mochar Chop (Banana Flower Croquettes), though a common dish, was also well made. There were generous amount of mocha inside along with peanuts and the crumb fried outside was crispy and non-oily. 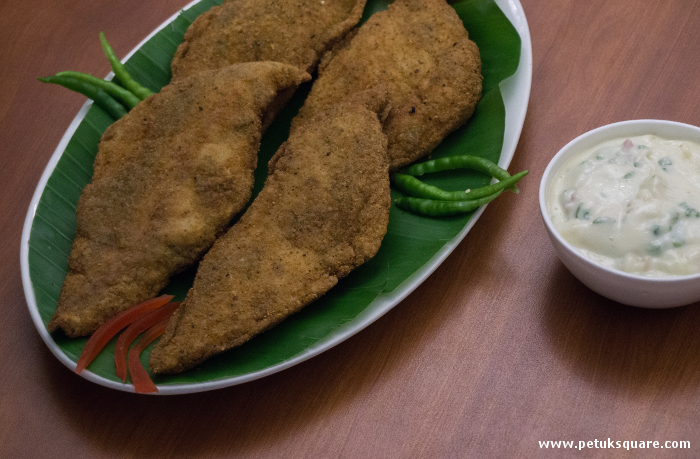 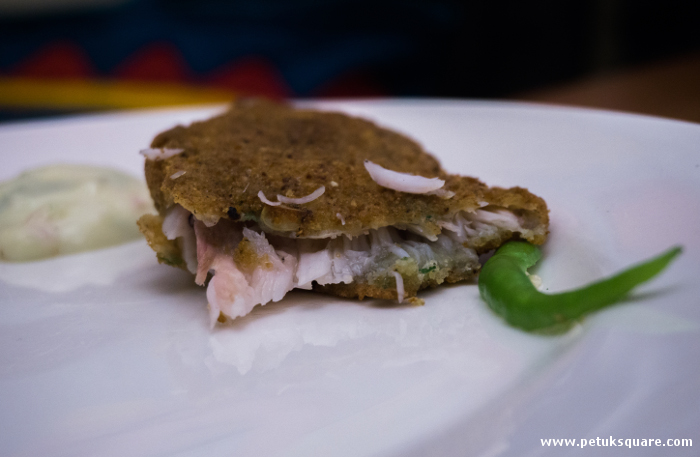 The thick and juicy fillet

Among non veg starters the diamond fish fry (fish fry shaped as a diamond), served along with tartar sauce, had a fat fish fillet. But the marination was not done properly and it lacked salt. If the marination and seasoning is taken care of this can be a good dish to order. 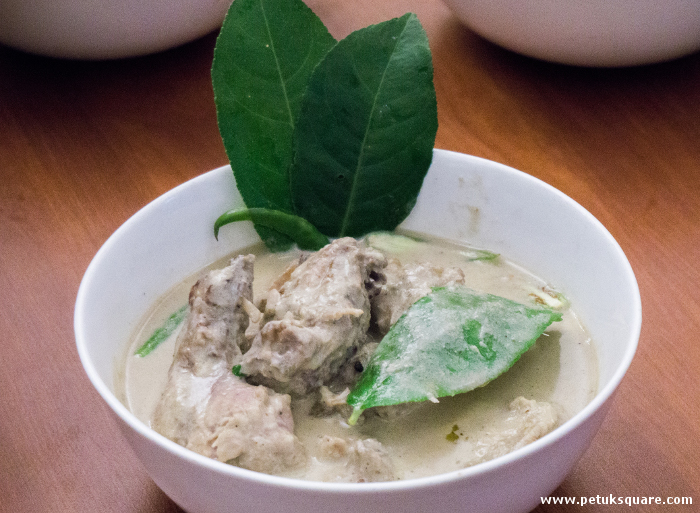 Coming to mains the item that caught our attention first was the lebu-lonka murgi (Lemon Chilli Chicken). Lebu and Lonka is a wonderful combination for curries and we were eager to taste it. The gravy turned out to be a nicely made one. It was flavourful, but the chicken pieces were bit tough. Apart from the quality of meat, this is good dish to go with steamed rice. 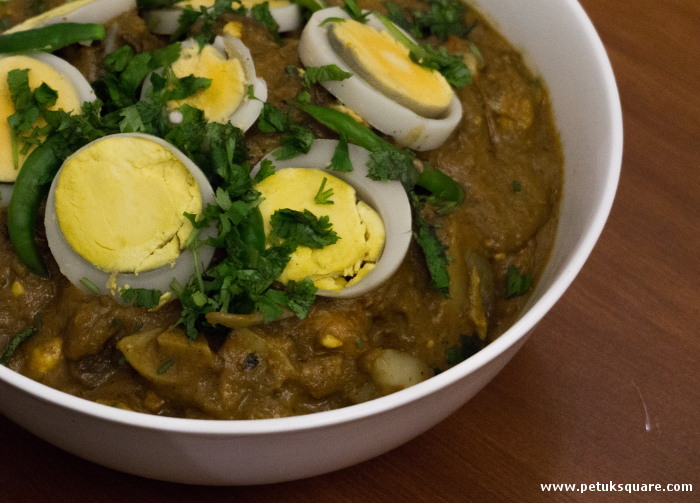 One dish which was perfect was the Mutton Dak Bunglow. Succulent pieces of meat and a rich and tasty gravy. One of the better Dak Bunglow preparations we have had in Kolkata. If you are here, this is a dish you can safely order. 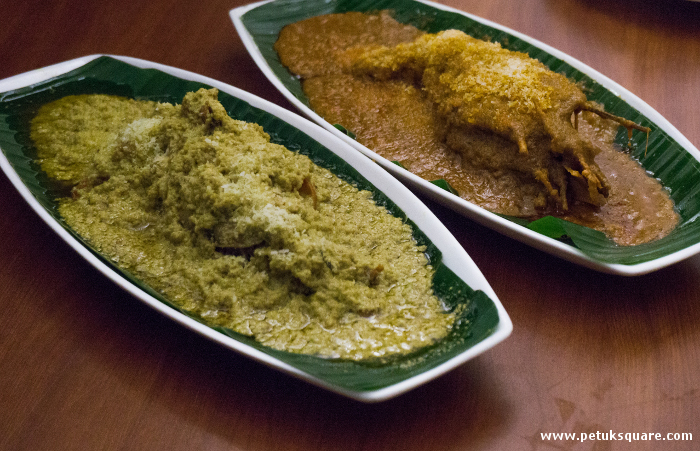 Another specialty you will find here is their Chingri Machher Malai Curry. They serve two versions of the same dish. The Ghoti one is made a little sweet and the Bangal version less sweet. Though this is a typical Ghoti dish, making two versions and naming them like this was innovative we thought. So order it according to your preference. The size and quality of prawn was good and the curry was tasty. 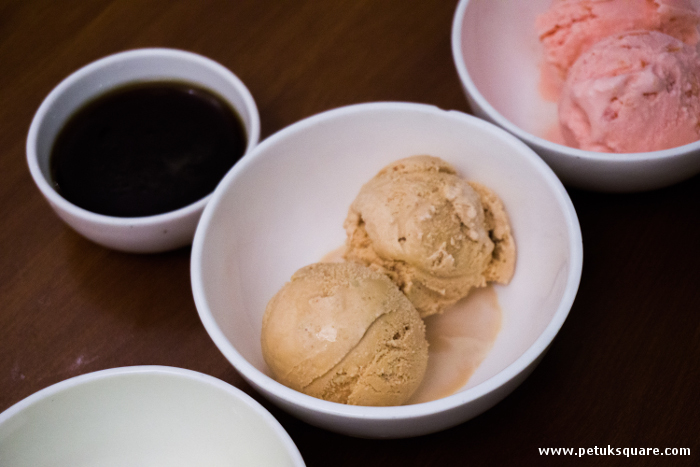 For dessert we were served Rabri, Bubblegum and Nolen Gur ice creams from Pabrai. Though I just love their ice creams, I think some Bengali favourites like Malpoa or Chhanar Payesh would have been a better choice. 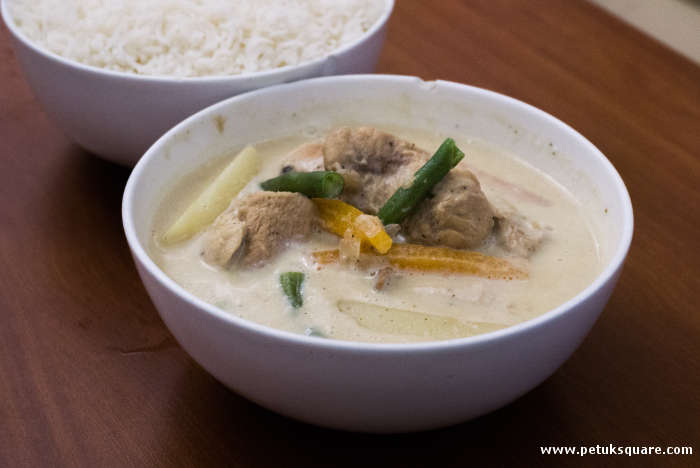 Among their specialties the best dish is for those who love their dogs. Being a pet friendly restaurant they have an item called Doggies Delight in their menu. It consists of a bowl of light Chicken/Mutton stew with veggies and steamed rice. So if you have always wanted to take your dog for a dinner, you know where to go now. 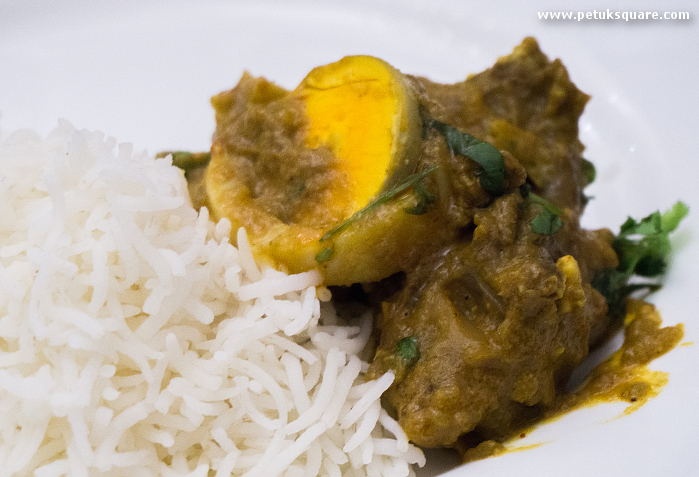 Steamed rice, eggs, succulent pieces of meat and a rich and tasty gravy

In all some dishes were really impressive and innovative like the Fotik Jol and Chingri Cake, while some needs a bit of improvement to win hearts like the Lebu Lonka Murgi and Fish Diamond Fry. We would suggest, do try out their specialties atleast to experience something new.

A special thanks to the foodie couple Chiranjeev Lakshman and Ramya Krishnamoorthy aka The Hungry Desis for the invite.